Academy on Capitalism and Limited Government

Each semester the Academy supports a lecture by a significant scholar or opinion leader to provide provocative and educational commentary on ideas critical to current events, human well-being, and American society. These events are open to and well attended by students, faculty, and the broader community.

Professor Craig Garthwaite, Director of the Program on Healthcare Studies, at Northwestern University’s Kellogg School of Management, discussed the impacts and future of Obamacare at a public symposium hosted by the Center for Public Policy at the Gies College of Business at UIUC. And Professor Anne Bradley, academic director at The Fund for American Studies and former terrorism finance analyst for the Central Intelligence Agency, offered her fascinating insights on government decision making and the war on terrorism 18 years after 9/11 to economics students. Please check back for video soon.

Economist Bryan Caplan was the featured speaker at the Academy-sponsored 12th Annual Symposium hosted by the Gies College of Business at UIUC. Combined with the one-sidedness of many college courses, America may also face an excess of spending on education. This is counterintuitive to a lot of people, but when you stop and think about how much society spends on education (and the increasing burden of excessive student loans) and the questionable content and return to much of what is taught it is hard to argue with the conclusion that the system is broken. Caplan argues, “Lots of kids loathe school.  They’re bored out of their minds, and humiliated by teachers’ endless negative feedback.  Such kids disproportionately come from poor and working-class families.  But since the middle- and upper-classes control the curriculum, they’ve stubbornly moved to a “college-for-all” approach to school – and turned vocational education into an afterthought.  The result: Most poor and working-class kids endure thousands of sad hours, then leave school unprepared for either jobs or college.”

The Academy sponsored a public lecture hosted by the Gies College of Business at UIUC on Monday, March 5th. The lecture featured Texas A&M professor Jon Meer discussing the impact of recent legislation raising minimum wages around the country. Meer’s lecture explained how detailed economic research can be used to dispel widely spread notions that regulations, like increases in minimum wage, can be implemented without harmful side effects.

Are markets inherently bad for environmental preservation? Or can property rights and markets help achieve conservation goals? These were some of the questions students at the University of Illinois learned to address with world-renowned philosopher David Schmidtz as part of the Eleventh Annual Fall Symposium sponsored by the Academy on Capitalism. Schmidtz, a professor with chairs in both philosophy and the business school at the University of Arizona, helped students work through the logic of how seemingly contradictory ideas like property rights, profits, and environmental conservation can actually work together to achieve numerous goals including conservation and economic growth.

Spring 2017 Lecture: How Economic Policy Should Be Changed to Achieve Greater Prosperity

UIUC alum Steve Moore spoke at the UIUC College of Business on Thursday, April 20th. Moore, a 1982 graduate of UIUC, explained the long and short-term dangers to the US economy stemming from continued government over-spending and regulation and outlined free-market reforms that would lead to higher long-term growth and prosperity. Moore served as chief economic advisor to the Trump-Pence campaign in 2016; he is a Distinguished Fellow at the Heritage Foundation and regular contributor to national television discussions on economic policy.

Spring 2017 Lecture: Economics and the Family

“The evolution of the family can be summarized as a movement of work from the household to the market, with the results being the liberation of human beings from unnecessary labor and a shift in the central functions of the family. Before capitalism, the family was both the central unit of economic production and the core political institution….The bonds that brought together married couples and sustained families were not romantic love…but the more practical questions of “productive compatibility”…. The love-based marriage had to await the capitalist revolution.” –Professor Steve Horwitz, Ball State University.

Professor Russ Roberts, of Stanford’s Hoover Institution, addressed students and the community at a public lecture as part of the Academy’s Tenth Annual Fall Symposium. His talk shed light on the many, often confusing, aspects of international trade that we frequently hear debated in the media. Coming just two weeks before the Presidential election where international trade has been a hot-button issue Robert’s insights on the costs and benefits of trade were eagerly anticipated and enjoyed by the audience. Professor Roberts’ lecture was the tenth in a series of annual fall events for students and the Champaign-Urbana community that the Academy has supported since 2006.

Spring 2016 Lecture: The Economics of Sweatshops

Professor Ben Powell, Director of the Free Market Institute at Texas Tech University, delivered the second annual Hathorne Lecture. Powell says he “became interested in economics through the writings of Milton Friedman, F.A. Hayek, and Ludwig Von Mises.” He is a popular economics lecturer on TV and at universities around the world. At UIUC Powell talked about the opportunities free-markets create for workers in poorer countries, and how what people in wealthy countries often refer to as “sweatshops” are seen a crucial economic opportunities for people trying to build a better life in poorer countries. After his successful lecture in Champaign, Powell also spoke to students at the University of Illinois-Springfield.

George Mason University economist, Professor Bryan Caplan, delivered the Academy on Capitalism’s Ninth Annual Fall Symposium Lecture in October at UIUC. A standing-room-only crowd, including over 700 students, packed the Illini Union to hear Caplan’s address on the economics of immigration. Caplan is a leading economic expert on immigration. Given the prominence the topic has received in the presidential election and news coverage this year students were eager to learn more. Caplan’s well-received analysis helped students learn how to tackle a controversial topic systematically using “the economic way of thinking” without reverting to the knee-jerk conclusion that all problems need a big government solution.

Professor Josh Hall, of West Virginia University, gave several lectures to packed audiences of students at the University of Illinois on the topic of “The Benefits of Economic Freedom.” Professor Hall is one of the world’s leading experts on the measurement and impact of economic freedom. He is coauthor of the annual Economic Freedom of the World report, which is used by scholars and governments around the world to understand and improve economic freedom and economic performance. In his lectures and one-on-one conversations Professor Hall explained to students how countries that have more freedom have higher incomes, more opportunities, more fairness, longer life expectancies, cleaner environments, more peaceful societies, and greater happiness.

Professor Terry Anderson, of Stanford’s Hoover Institution, addressed students and the community at two public lectures as part of the Academy’s Eighth Annual Fall Symposium. His talks and meetings on campus helped break down the myth most students are taught that the government has to protect environmental resources and amenities from destruction by the market. Anderson’s ground-breaking approach to environmental economics, known as free market environmentalism, has helped countries around the world realize that the power of free markets and cooperation can be more effective than government regulations at preserving and protecting environmental quality and health.

A standing-room-only audience attended the Academy’s Seventh Fall Symposium on perhaps the most critical challenge facing America’s future: the ongoing decline of American Economic Freedom and the threat to our standard of living. The last decade has witnessed a dramatic decline in economic freedom in America. The decline in economic freedom threatens to decrease long-term growth, income, and American competitiveness. America is one of only a handful of countries around the world to have experienced such a decline in recent years. Professor Robert Lawson delivered the lecture attended by over 450 students and community leaders.

Sixth Annual Symposium: Return to Prosperity: Tough Choices for the Next President

Illinois alum Steve Moore addressed a full house at the College of Business for the Academy’s Sixth Annual Fall Symposium. Moore, a senior economics writer for the Wall Street Journal, explained how runaway government spending and high taxes have created a daunting challenge for America. Moore’s proposed solutions include greater reliance on free markets and lower tax rates to unleash the energy and creativity of America’s entrepreneurs and business owners. A panel of Illinois professors, below, discussed Moore’s ideas with the audience of students, community members and business leaders.

Scott Bullock, Senior Attorney for the Institute for Justice, met with students and gave a public lecture about his work fighting for the protection of private property rights and small business owners. Bullock has sued local, state and federal government agencies for unjustly taking private property away from home owners and wrongly limiting the rights of small businesses to operate and make a profit. His numerous experiences, including his appearances before the Supreme Court, were an inspiration to students in the Colleges of Law and Business. The overwhelmingly enthusiastic response from students has earned him a standing invitation from several professors to revisit their classes in the future to share more of his experiences and help students learn about his crucial work helping to protect property rights and free markets.

Historian Steve Davies of the Institute of Economic Affairs in London and the Institute for Humane Studies in the U.S. was the keynote speaker for the Academy’s Fifth Annual Fall Symposium. Davies provided a historical narrative that traced the origins of American reactions against big government. Since the American Founding, popular movements have arisen to fight for individual liberty in the face of government growth. Davies’ lecture provided historical context for today’s Tea Party movement and recent widespread popular unease over the expansion of government.

Renowned law professor Richard Epstein addressed the Academy’s Fourth Annual Symposium on the role of the constitution today and joined three University of Illinois law professors in a public discussion of the shortcomings of Obama’s health care reforms. Epstein also spent the day visiting with students and faculty from the University’s law school.

Third Annual Symposium: “Are We Regulating Capitalism Out of Existence?"

Speakers: Michael Tanner is a Senior Fellow at the CATO Institute. Steffie Woolhandler is a professor of Medicine at Harvard and co-director of the Harvard Medical School General Interval Medicine Fellowship Program 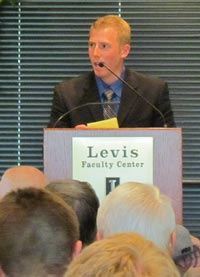 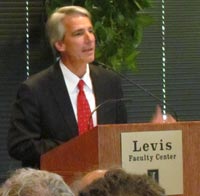 ENCOURAGE THE
NEXT GENERATION
OF AMERICA’S
LEADERS.